I see why some girls don’t like to be slaves to their boyfriends, now I know the reason why most girls will say if he hasn’t married me I won’t cook or clean for him and I wish I had that same philosophy before dating this cow.

No one has ever had a problem with my cooking,  but anytime I come to his place he complains about my food, it’s either the salt is much or the pepper isn’t enough, one day he told me I didn’t cut vegetables well and it made the soup bitter, I was shocked, I didn’t know vegetable sizes could make soup bitter, anyway I let it go and apologized. 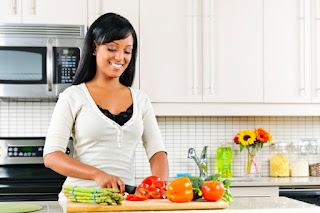 I read you posts on Nairaland and decided to email you and know if you can talk some senses into me, yesterday I prepared rice and stew because his friends were around, I was at my place and he called me to come to his and cook and me being a fool in love hurriedly left everything I was doing, went out in the rain just to go cook for the goat who doesn’t even appreciate my food.
After I had spent two hours cooking, I served he and his friends, he took one spoon and spat the whole food out and landed me a slap on my face, everyone was shocked, he said how many times has he told me to use olive oil instead of groundnut oil to cook stew for him, I lost my tongue and voice, not only has he never told me anything like that, I had always cooked with groundnut oil for him, his friends were so angry at him that they left without eating the food.
Bella what do I do? Do I just walk away and save my face? The shame is becoming unbearable each day and I just can’t take it anymore.
Talk2Bella.
You’re in a relationship with an abuser and this is how it starts, from emotional torture to physical torture and most times death follows.
You need to walk away ASAP, I don’t need to advise you much, it’s clear you know what to do; from your email I can sense you aren’t a weak woman and walking away would be very easy you should take that step.
Nothing concerning your cooking will ever please him so do not even try, he’s going to keep complaining even when you do it exactly the way he told you to, nothing ever pleases people like that.
Yesterday was a slap, tomorrow might be the mortuary, is he worth all these?
Relationship Stories

She Embarrasses Me Anywhere We Go With Her English.

He Says I’m On Reserve, But He Keeps Seeing Other Girls.

I Got Pregnant For A Man Who Doesn’t Want It.

How Do I Politely Turn Down A Marriage Proposal

My Neighbor Beats His Wife All The Time