I Have Been Wearing His Engagement Ring For Four Years.

I have known my fiancé for six years now and we have been engaged for four years.

Two years into our relationships I started pressuring him, told him I needed to know where the relationship was headed to and he should come know my parents and siblings that two years was enough for him to know what he wanted in this relationship. 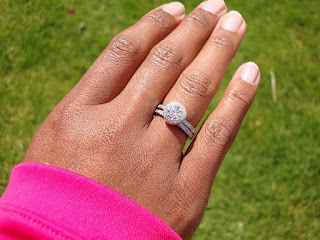 Photo Credit: diamantbilds
I pressured him so much, threatened him with breakup, my last relationship had ended badly and I didn’t want this one to just go down the drain, it wasn’t long after this he proposed, met my people, I met his, we threw a big party and finally moved in together.
It’s been four years after that day and he’s never uttered a word about marriage plans, not a single word, I have been patient enough, wearing this ring with pride, I finally got engaged with the hope that I’d be wedded in a few months or maybe a year and its four years later, please how do I breach the marriage subject to him.
P.S money isn’t the problem
Talk2Bella.
He wasn’t ready for any commitment and you pressurized him, in your little mind where did you think this was going to end? He wasn’t ready to let you go at the moment hence he quickly proposed so he could keep you and now he doesn’t know what to do with you.
Is communication lacking in your relationship? If no why haven’t you been able to ask him why for the past four years he hasn’t made plans for the wedding, or is he expecting you to wear that ring forever?
Wake up and smell the bacon, its either he doesn’t want to marry you or there’s something important holding him back, why don’t you be the dutiful fiancée and find out what it is, instead of jumping into conclusion, wearing that ring forever or just being agitated about a wedding that might never take place.
Life's Stories

Guide 101 On How To Stalk Your Boyfriend.

My Fiancé Brags Alot, He Lies About Everything

My Boyfriend Doesn’t Give Me Money