Why do ladies feel shy to ask a guy out? You think its only men who deserve to ask ladies out, do you know there are some shy guys out there who might like you but don’t know how to approach it and here’s the shocker you might also like that person but you’re waiting for him to make the first move.

There’s no shame in asking a guy out, don’t play with your feelings, what’s the worse that can happen? He turns you down and so, how many guys have you turned down? Did they die? They moved on right so you do the same.
Do things that would entice him to you, don’t be the regular girls he sees out there, be classy, polite, nice, and do nice things for him also, take him out, buy him little presents, surprise him, spoil him, men do these things for us, we should reciprocate the gestures. 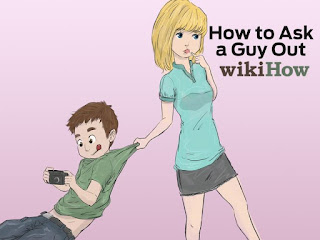 Photo Credit: WikiHow
Before you embark on this mission, make sure he doesn’t have a girlfriend; I don’t want you wasting your time, alright? Make sure he doesn’t friendzone/sisterzone you, you need to break out of that shackle immediately because once he starts seeing you like a sister those feelings might be hard to reciprocate, find out things he likes, know his hangout spots, bump into him on occasions, open your mouth and tell him “Guy I like you, I don’t know where this might lead but I’d like to give it a trial if you’re willing to”
Don’t let anyone discourage you that it is the sole duty of a man to ask you out, it doesn’t make you cheap or lose, you just know what you want and how to get it, some men love women who have this kind of boldness, they appreciate you and see you as someone who won’t let them down because your feelings might be higher than theirs.
What are you waiting for? Take that bold step and be happy, and if it doesn’t work out don’t be discouraged you would definitely find the right someone someday.
Isabella Ibeji
Relationship Stories

Help! My Girlfriend Is A Shopaholic.

We Met On Badoo, Can I Go Visit Him

How To Be Broke And Still Be A Ladies Man.

I Need A Sugar Mummy.