Would You Choose A Good Career Over A Relationship?

Career and relationship sometimes don’t see eye to eye, recently we were all amazed when a married female politician turned down a juicy appointment from the president himself, her reason was what most people termed “One In A Million” but is it really? She wanted to take care of her sick husband.

Why many might crucify me for what I am about to say, I think sometimes the prospect of a good career should supersede the notion of a healthy relationship.
Building a career doesn’t just stop with you alone, it’s a bridge if built very well will serve as a passage or link for those who will come after you, this might include family, friends and loved ones so why would you want to burn that bridge or destroy it because of a relationship which might collapse any moment?
Why I would give that lady a pass, she’s married and with kids and whatever bridge she’s built brought her to where she is currently, but I have seen a lady who quit her banking job because her fiancé said he would not get married to a banker because he perceives all of them as corporate prostitutes, I have seen guys who were on the path of becoming superstars through the work of their hands quit their jobs because their girlfriends didn’t like what they did for a living. 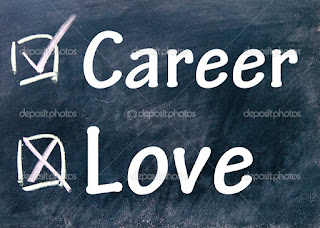 Photo Credit: Depositphotos
Would you quit your career over a relationship? I asked myself today when a guy was asking me out on BBM, I told him I wasn’t ready to date, I had some prospects I was looking into and relationship might be a hindrance to that step I wanted to take, this guy opened his mouth and said “What could be more important than a relationship”? I was shocked, like seriously? You’re asking me that, even if it ain’t a career there are far more important things than dating.
I have always been someone who would put career ahead of anything, so I thought growing up, then I saw the strain careers put on relationships, then I began to wonder if a really good career can co-exist with a relationship, what will it take, what are the steps to put in place to make this successful, we see celebrity marriages collapse, we blame them without knowing what they go through, we see successful women quit their marriages, we see successful men quit their marriages, the more successful you are in a career it seems your marriage or relationship is doomed for failure.
For men it’s easier to ask a woman to quit a nice career, but if a woman should ask a guy to quit a nice career do they agree? Women have the right to a nice career too you know, we can have a career and also a home, maintain our families as long as the husbands understand this, we’re ready to support our husbands when they want to pursue theirs, why is it difficult for some men to go against their wives when they also want to pursue theirs.
I need to hear people’s opinions about this; would you quit a good career over a relationship? Would you ask your wife to quit her career over her marriage? Would you ask your husband same?
Do men handle careers more than women? Do women get carried away with their careers? Can marriage and a busy career work hand in hand?
https://youtu.be/BCmlPm-wrTA
Isabella Ibeji
Fiction this

The Unbreakable Vow {A Short Story}

Will You Leave Your Husband At Home With The Maid If He Mistakenly Takes Viagra?

Things You Shouldn’t Say To Your Partner When They’re Going Through Hard Times.