Things You Shouldn’t Say To Your Partner When They’re Going Through Hard Times.

So many relationships have failed because of words, sometimes too much words or a lack of it. Words when said cannot be taken back, most people say the most vile things in a spate of anger or just out of pure hate, they don’t think well sometimes they do, they say calculated hateful things to their partners at their lowest, do not mock a man when he is low for that’s when the most evil of all thoughts comes into his mind, he might act it out on himself, those close to him or to that person who’s said such words to him.

Some men lose their jobs and their wives use this opportunity to remind them having a manhood doesn’t make them men, these women remind them of how useless they’re for not being able to take care of their families.
When men become depressed, they’re mocked because they are seen as weak, women who are supposed to stand by and with them become the microphone who announce to the world that their husbands are simpletons, men without spines, men who cannot take a beating, theymocked, abused verbally and emotionally. 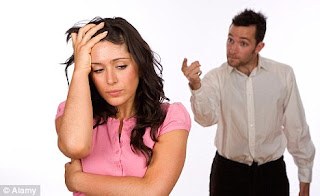 Photo Credit: Daily Mail
Women aren’t left out, some men say the most vile things to their partners you would begin to wonder if love is the foundation of such relationships, get out of here you fat pig, why do you stink so much, don’t you see how other women dress, why do you always have menstrual pain, why can’t you pass a simple exam, why are you so weak, these things go on and on, sometimes you might think this is an encouragement but vile words have led so many people to their graves, become suicidal, experience depression, so instead of talking down to your partner how about try saying words like this.
He loses his job—– Pray with and for him, don’t remind him every instant, don’t even give him the notion that he’s doing less as a man, respect him, pamper him, but always whisper a soft reminder that he can do better by searching for other jobs, he shouldn’t wallow in his current stay, it might take a while but things will bounce back.
So your girlfriend/fiancée/wife is gaining weight—– don’t be vulgar about it, gaining weight sometimes can be due to a lot of things, it’s not only when you eat too much or lazy around you gain weight, it can be a sign of depression or health related issues, find out why and how she’s gaining weight, sometimes it might be good for her and other times bad, sacrifice your time and food timetable; eat healthy with her, exercise with her, don’t threaten her or chastise her you will be surprise the amount of problems you can solve with patience and understanding.
So your man/woman has body/mouth odor—– why are you always covering your nose? What measures have you taken to help out? You keep discussing him/her to your friends, telling them how you can’t stand the odor that oozes out of their bodies. You come back home and do the same, you won’t kiss them, eat with them, sleep on the same bed with them yet you claim to love them, do you know what love is? I don’t think so what is wrong with you? You think love is superficial? Outwardly? Or you’re in love to impress a couple of people think again.
So they don’t have a job yet an you do—- support them, don’t just support them, support them without keeping tabs or expecting anything in return like marriage or payback or turn them to maids, what is wrong with you? Don’t remind them of their jobless state you’re not good neither are you fate, love them, love them so much even if things don’t work out that gesture will never be forgotten, be kind, buy them things, give them a little allowance, help them search for jobs, don’t be bossy because you have a job now, be modest because their miracle might elevate you more.
So she doesn’t have a child yet, you go about telling people she’s barren, useless, she’s a man, so he has low sperm count and you tell the whole world your husband is less of a man, common, there are better ways to encourage someone, there are better ways to look for solutions, there are better ways to take care of situations, it doesn’t have to be mean, vulgar and vile.
I have so many things to say but I know you get my point and most of us are guilty of these, change now before it’s too late, pride and arrogance coupled with envy and hate are what brings down a soul, you’re guilty, I am guilty but we can make amends from somewhere why not start now and be a better person for your partner, sometimes a stranger too who knows your light at the end of the tunnel might be at the beginning.

He's A Tailor With Low Income Who Wants To Marry Me

I Have A Girl Who Spends Money On Me, But I Don’t Love Her