My Neighbor Beats His Wife All The Time

I have settled fights tire, I have begged preached counseled and ignored but nothing is working, I don’t even know who to blame the woman’s mouth is like a tap that doesn’t stop running and the man is like a wrestler who’s like a hybrid bull he never stops to retaliate. 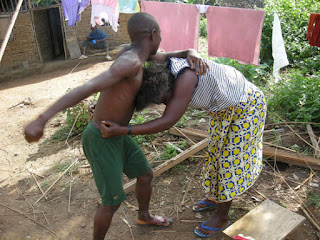 Photo Credit: Biyokulule
I feel for the woman, no one should ever raise their hands on a woman, the other neighbors have given up because they have pleaded with the woman to leave but it’s like she wants to die there, I am married myself and have daughters, I wouldn’t like any man to treat my daughters so that’s why giving up is difficult for me.
This is an everyday meal for them, in the presence of their kids, they naked themselves, injure themselves, and behave like they are both under a spell, these children are still little and they watch their parents disgrace themselves, I need to know how I can help them.
Talk2Bella
Have you tried calling the police and child rights services? In cases like this sadly nothing can be done till one of them drops dead.
Do not stop helping them for the sake of the kids, and please whenever they’re fighting with weapons make sure to flee so you won’t be used as a shield or killed, I am sure you have read stories like that.
What is the landlord doing about these disturbances? Does he live with the tenants? Has he reported them to the police? Both of them need to be reported to the police before something awful happens.
Relationship Stories

I Am Dating A Medical Doctor Who Can’t Afford 1 Square Meal.

My Fiancé Stammers, How Will He Say Our Wedding Vows?

I Can’t Communicate With My Girlfriend

Do I Tell My Friend I Had An Affair With Her Husband In The Past?

How Do I Cope With A Thieving Girlfriend?

Long Distance Relationship Is A Time Waster For Women.