Why Every Man Must Bend A Kneel To Propose.

Too much are expected of women, we must clean, cook, give birth, change our names, be faithful, submissive, meek, diligent, steadfast, and make our homes a success.

From the day a woman is born these instructions are like a program installed in her brain, she’s been programmed to do these things without questions and abide by them, women give up so much to be in the marital race, they give up more than the men and one single thing a man should do to make a woman feel special, one thing he should do to show sign of commitment, one thing he should do to show he’s going to be her burden bearer for life, he feels too big to do it because he says he’s not a white man.
Do you know what differentiates a man from a boy? If you don’t know this, you’re still a boy it doesn’t matter how old you are, real men know what to do, real men don’t feel ashamed to do things, real men don’t say “what will my friends think of me when I do these things for her” real men are doers, real men are pace setters, real men make boys envious and want to be like them, he thinks and weighs his actions, he foresees and makes plans for the future, he knows going down on one kneel to propose to the woman he loves is a sign of commitment and not a macho contest, he knows this is a must. 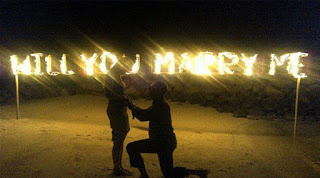 I accompanied a friend to go get an engagement ring, he wanted to plan a surprise engagement party for his soon to be fiancée, while we were getting the rings he said to me “Bella I don’t think I’d be able to go down on one knee to propose, I am a wolf, I lead a pack, I can’t go down on one kneel to propose”. I felt like a sledge hammer had hit me on the head, I must have turned bright red at the moment because I kept saying “You’re not serious, she’s the queen of the pack, even a wolf bows to his queen, he kept blabbing how he didn’t think he will be able to do it because the pack would be there.
Do you want to know the symbolism of going down on one knee to propose? That’s submission, that’s protection, that’s acceptance, that’s seeking, you go down on one knee, look up to her and she looks down on you, she sees all your flaws and accepts you for who you are and not what you are, in that moment you kneel you have given her the impression that she comes first before anyone, your back is there to bear her burdens, your shoulder is there for her to rest on, your knee is there to support her, when she looks down on you with love and sincerity her prayers for you are accepted in heaven. Going down on one knee represents, honor, respect, surrender, humility, etc.
Real men know what I mean, real men know what I’m talking about, it’s another Saturday and you’re screaming women are evil, women are deceitful, women are cunning, women are this, women are that but your mates are getting married because they know the right thing to do, keep saying you can’t go down on one knee to propose and your future partner will keep passing you by.
Isabella Ibeji
Life's Stories

Is It Okay to Date a Friend’s EX

My Fiancé Brags Alot, He Lies About Everything

Do I Tell My Friend I Had An Affair With Her Husband In The Past?

My Boyfriend Doesn’t Give Me Money